I did something else with the internet

So I was self hosting my WordPress blog with Digital Ocean, but now I’m back to this one (for now).

I did something with the Internet and have moved my blog!

My Blog has moved! In my learning about computers and whatnot, I decided to buy the domain hildawg.com so that I could use the Raygun4Wordpress Plugin myself, and understand Raygun better, as well as learn a thing or two about error reporting.

So far, I am more confused – but I’m hoping this will change at some point 🙂

See you all at hildawg.com!

Filed under The world of tech 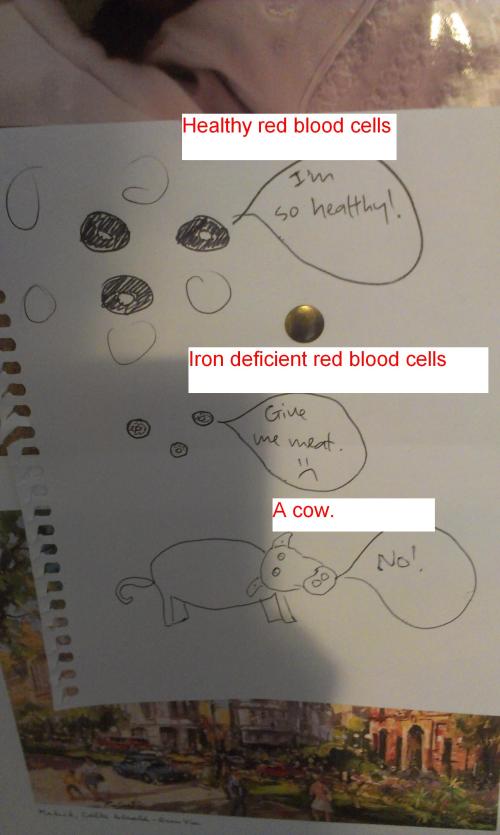 An artistic depiction of iron deficiency of red blood cells. 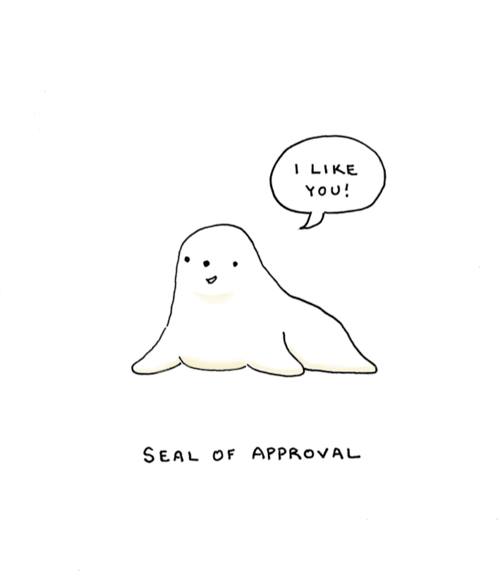 Why must seals have such sad faces?

3 things that are perplexing me of late.

I will not let you beat me, little bundle of odd symbols! Even though I wish for a cat to soothe me to sleep after hours of crying about you. (Click this awful image for more info).

It terrifies me. Even just its general shape is painful to the eye – it’s all pointy and sharp. It’s like being in that one episode of Game of Thrones where they stabbed and sliced everyone to death with their swords and daggers… oh wait, that was every episode.

What was even more upsetting to me upon coming across this wee symbol of death in the biostatistics course I’m doing, was to learn that this messy bundle of numbers merely works out a relationship between x and y, and it can only be within the realm of 0, 0.25, 0.5, 0.75 and 1.

Which basically just suggests whether x and y have a strong, medium or weak relationship. What the hell! Why all the crazy symbols then?

And let me tell you, I really wish those two would just sort  it out. I don’t want to have to mess around with this horrid formula every time you guys are having relationship problems! And really y, what are you doing going back to your x anyway? Can only lead to trouble.

That was a terrible pun, and I apologise – but I’ve been rendered incapable of sufficient wittiness by the imminent math anxiety bought on by the commencement of this statistics course.

Mathematical anxiety is a thing!

Seriously, I have researched it – and the Wikipedia article defines mathematical anxiety as:

“anxiety about one’s ability to do mathematics independent of skill.”

It turns out there is a plethora of info and studies about mathematical anxiety. I personally reckon mine stems from the way maths was taught when I was a child. We were taught what to do, but not why. I like to think that the way education has moved in New Zealand, the emphasis is more on why we need to find x, and not just how.

People who are mean about my enjoyment of vegetables

I just don’t really like to eat meat. For a variety of reasons, and I’m not even going to have a rant about it – and I don’t unless someone is insistent on getting all upset about the fact I don’t choose to eat animal products.

Which happens all the time.

I really don’t understand it, and it’s kinda offensive. If someone were to get all up in another someone’s face -unprovoked- for being religious, it would be considered inappropriate, and you would probably consider the person to be a bit of a dick. It’s their belief, and is likely important to them.

I eat like I give a fuck, and yet I won’t ever make a big deal of other people eating what they want – unless they challenge me first. Then it’s all on! 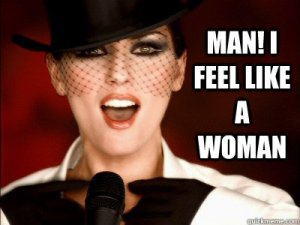 Seriously, this has been in my head for WEEKS.

To explain, I am the only lady in the company – and therefore the office. I also live with two other dudes, which means that I can get through entire days without any contact whatsoever with another female – unless you count Bonnie the cat. Who I’m pretty sure hates me.

And mostly I really like it – we have fun, inappropriate comments flow freely and guys are generally easier to be around than girls.

But then one day when I realised that every time I go somewhere in a car I sit with my legs apart like a bloke called Bruce who is probably a builder, likes Metallica and prefers his hair short at the top and long at the back – I wondered, “am I forgetting that I’m a lady?”.

So naturally I listened to some Shania, because she too once forgot she was a lady… and have had ‘Man, I feel like a woman’ in my head for so long.

I’m not actually that perplexed about this at all. It is what it is.

So to sum it up, I am primarily perplexed about a formula of trickery, vegetable hatred and a Canadian country singer who quite frankly understands my feelings. Girlfriend deserves her fame!

Pigs will fly (whilst simultaneously coding) before you’ll ever hear a software developer say these things.

To explain the accents, we’re from New Zealand!

The small print: Real Mindscape staff shown in this video. No CRT monitors were harmed in the making of this film.

Today I’m going to talk about two SAAS based error logging solutions for .NET; Raygun.io and Airbrake.io. I was recently contacted by the community manager for Raygun and was asked to give their solution a try. I was already using Airbrake but had not been very impressed with the level of detail we were getting with Airbrake. While Airbrake was working really well for our Ruby based projects it wasn’t reporting the same level of details for our .NET projects. I decided to give Raygun a try and I’m super happy that I did. Let me cover some of the reasons why I like Raygun over Airbrake.

Raygun provides a super easy implementation to get started with using their product. You can download their library from NuGet via searching for their package name; Mindscape.Raygun4Net. Once Raygun is installed into the project you are working on, you are ready to go…

Error logging with Raygun and a free t-shirt 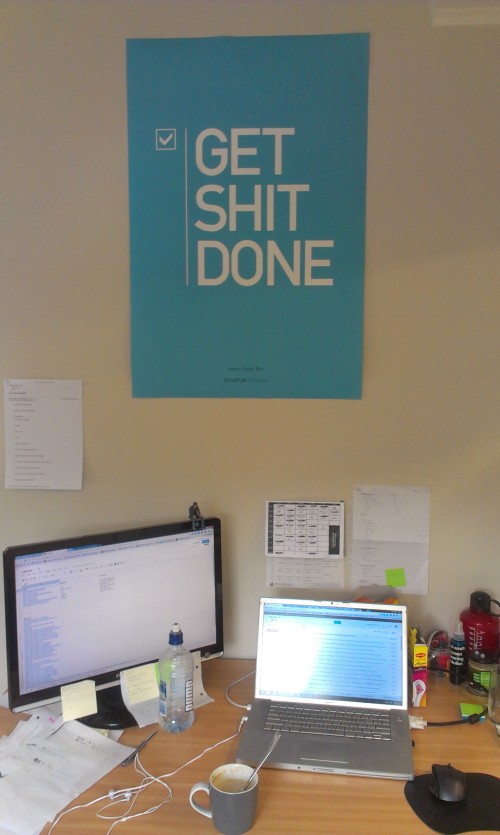 Sad Keanu is sad, because it’s been ages since I’ve blogged about my progress with learning to code. 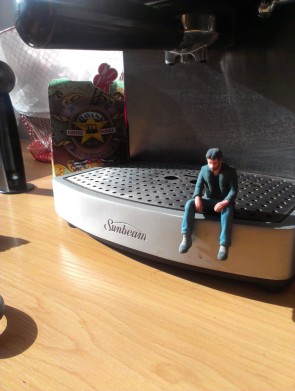 I have indeed been working my way through the html, JavaScript and basic web tracks on codecademy.com over the past few months. But as a learning addict, among the other hobbies that keep me busy (learning espanol, reading maths books for funsies, resting in child’s pose, playing musical keyboards and travelling to Espana!) I haven’t found much time to post about my progress.

Also, Sad Keanu has been taking up much of my attentions, no matter how many tiny sandwiches I prepare for him in the hopes he will be cheered. 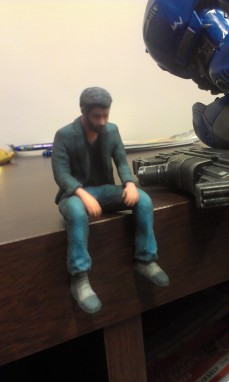 Sad Keanu, y u no eat my sand witches!?

Oh yes, and there is something else that’s been occupying space in my noggin and killing my time, and that thing is a Raygun. 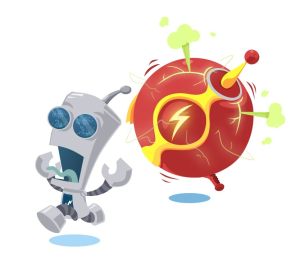 A raygun!? What the f…alefel?

If I were you, I’d be thinking, what are you talking about, Willis? I shall explain. Put that coffee down!

Raygun.io is the newest product from Mindscape , and if you recall, this is the company for whom I work. As far as my understanding goes (and as you know, when it comes to things of a technical nature, I have the understanding of a gnat. Actually, that is uncalled for. Gnats could be very adept in the area of technology), Raygun is awesome for tracking, reporting and annihilating software errors.

So when whispers of rayguns and exception handling began to fly around the office (or rather, be sent electronically via IMs and magic) – I was somewhat confused about why exceptional things needed so much handling, and  what the hell a stack trace was. It just made me think of stacks of pancakes. And now I want pancakes. Jesus.

So, I decided one evening after beverages of happiness had been consumed (it was beer), that my new goal would be to carry on with Codecademy until I was proficient enough to build my own basic web app, and integrate Raygun into it so that I too, could throw an error.

But then when said drinks of happiness had worn off, I realised that such a task would be a slight challenge for me, known fearer of websites. 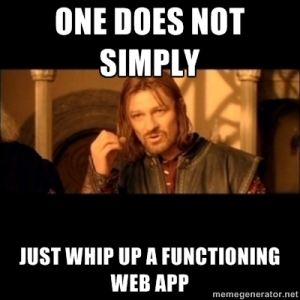 No, one does not.

I realised that now it wasn’t just a case of working my way through Codecademy’s modules, and then feeling all happy and shiny when I got a new ‘I can do basic html’ badge – but that I actually needed to make a real, working app. That people might look at.

Where should one start on such a task!? I’ve grasped the basics of making a static webpage, but actually making it perform actions is beyond me. How do I code all the things!? What was your first app? How did you get started with coding? Leave your  comments below and make a girl feel better.

I want for this to not be a lie: 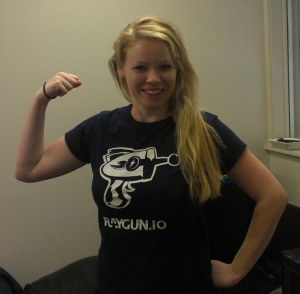 It looks like I know how to use it! Photo lies!

Word to ya mother. Hilldawg out.

Filed under Learning to code, The world of tech